A Wet But Productive Sunday 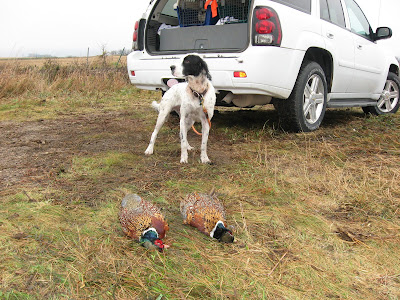 Tina with her wet but worth it harvest.


It was looking like this weekend could be a total loss.  I had bailed on hunting on Saturday because it was supposed to rain all day ( it didn't ) and it was raining on me as I was approaching Hutchinson where I was going to hunt a farm just south of town.  I figured that if worse came to worse I'd take a nap at the field and then a two hour drive home.  As I pulled up to the farm the rain had become just a mist so I unloaded Tina and we started to hunt.

Wet was the operative work for this farm.  There were areas totally underwater that most years I have been able to walk across as they were dry.

Tina started to get birdy almost as soon as we started to work the area.  She went on point right as we reached and the first area with thinner cover.  Three hens got up when I approached and they went right for the heavy cattails.  We started to work towards the south side of the field where the corn was down.  We usually push this edge until we he hit the far edge where the cover is thinner.  More ofter than not we will put up birds off of the corner but today was the exception proving the rule.

We turned towards an area of thick willows but Tina kept wanting to move towards the grass cover so I followed her and put three more hens up from her point.  After working the area for a little while I heard a cackle and looked up to see a Rooster land about 100 yards away.  It tried to refresh but I think it was too tired to make a good flight of it so it remanded in the same area.  Tina and I made a beeline for it and got a fast point, flush, and shot.  I was happy to connect on this bird as we hadn't been seeing any other roosters so far.  After putting the bird in the game bag we made our way back to the grassy area.  I was planning on work a set of pine trees that bordered the corn field.  We didn't make it to the edge as Tina locked on point as we approached an area of cattails and a rooster tried to make it's escape through the air and was met with a load of #6 shot.

On our way out of the cover we saw three more roosters along with a number of hens wild flush.

It ended up being a good hunt especially when you consider I thought I might just end up napping and driving home.

Monday Post Script
Tina is limping heavily today which has me concerned as she was fine the rest of the afternoon yesterday and when I put her out before her bed time.
Posted by tim at 2:51 PM No comments: 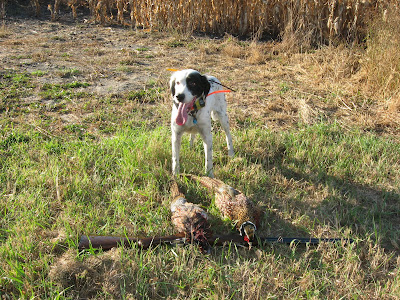 Saturday.
Each opener starts nervously for me. Will there be birds? Will the dogs adjust from one species to another? Will I be able to hit anything?

It was going to be a different opener than last year when I woke to snow on the ground, it was supposed to top out at over 50 degs this weekend.

We went to a farm west of Hutchinson, Mn. The corn was still up around the CRP so I wasn’t sure if the birds would be in the corn already or not. Tina and I worked the grass for 10 minutes before the first point of the season, it became the first rooster in the bag of the season. We kept working the grass and didn’t see any more birds. I was concerned about the lack of hens even getting pointed. We worked towards and areas with 5 or 6 trees along a small ridge. As we got closer to the trees Tina started to get birdy. Two birds came out the backside of the trees and I was able to connect on the second one with what looked to be a solid hit. As Tina went over to make the retrieve it took off and I was so startled I didn’t even get off a shot. I decided to walk over to where it went down and see if there were any feathers or other evidence of a hit. As I got closer I saw that my bird was actually dead and laying in the grass.

After cleaning the birds I took Marge and Fergie to a different farm just to let them run and do some pretend hunting. With Marge I hunted the edge of a small stream in the hopes of putting up a duck as we have in the past. This year the water was running too fast for any ducks to be hanging out so we just ended up getting in a good workout. 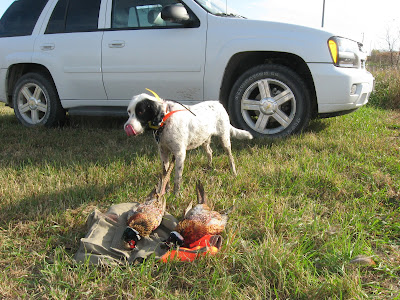 Sunday
We returned to the same farm that we started with on Saturday. I was curious to see if we would see more birds and specifically any hens. Tina and I worked the areas that we saw birds yesterday but didn’t get any action. Next we worked the edge of the corn field hoping to find any birds that hadn’t made it into there yet. Tina found lots of scent but no birds. We cut across to one of the two sides that is bordered by a dirt road and Tina was doing a lot of soft points and relocating. As we got close to the end of the thicker cover the point became a nice solid one and on walking in a lone cackling rooster got up and came down with the shot.

We moved towards the drainage ditch and followed it out to where we parked the truck. Often times we will move birds out of this thicker cover but no birds this time. We worked our way back to the middle of the field and started to push thick to thin. Again Tina got more and more birdy as the cover got thinner. A couple of relocations later and we had a nice point and we finally found four hens that were grouped up together. We worked our way back to the truck along the corn and not too far from the truck we had a nice point. I had to pull the trigger quickly on this one so that he didn’t fall into the corn. It was a nice end to a day of good dog work.

The early days of any season can be a chance to get the dogs some work on younger less experienced birds that will help to build their confidence. It is also a chance to take a few easier birds that will be balanced out by tough conditions later in the season.
Posted by tim at 2:26 PM No comments: