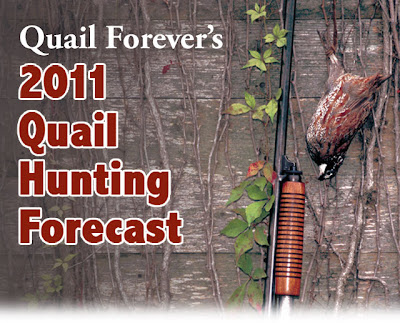 A combination of unfavorable conditions, from drought in the south to hard winters further north, and continued habitat loss will make the 2011-2012 quail hunting season tough on hunters.


On top of the drought in Texas to the hard winter in Iowa, there are 5 million fewer Conservation Reserve Program (CRP) acres – many of which acted as quail habitat - than there were just four years ago. Quail Forever is advocating for a strengthened CRP and other federal conservation programs in preparation of the upcoming Farm Bill, but we cannot do it without your support as a Quail Forever member.
Despite the overall decline, there are still coveys to be had should hunters be willing to walk hard. The quail bread basket of Kansas, Oklahoma and Texas will still provide the best numbers of bobwhites. In the southeast, habitat improvements are making a difference at localized levels; and western quail hunters should be the happiest of the bunch, with numbers for all western quail species strong across the board. Remember to always consult official state hunting regulations for rules and season dates, and please carry Quail Forever's code with you into the field this fall:

As a member of Quail Forever, I believe in conserving wildlife and protecting the environment. I promise to leave the outdoors a little better than I found it. I will hunt safely and treat hunting on public and private land as a privilege. I will always ask permission before hunting private land. I will obey all game laws and insist my companions do as well.

Email ThisBlogThis!Share to TwitterShare to FacebookShare to Pinterest
Labels: Quail

I've started the last few pheasant seasons by hunting in the Hutchinson, MN area and have had good luck so I decided to go with what had been working.

Our friend Greg and is GSP, Tank, joined us on the hunt.  Our first stop was a farm just west of Hutchinson.  The corn was still up along two sides of the field.  We started out by following the edges of the field in hopes of cutting off any birds that might be trying to make it to the corn.  The dogs did get birdy along and in the corn but we didn't move any birds.  Next we moved towards some trees on the way to the drainage ditch that cuts through the unit.  The dogs didn't get too excited in any of these areas.

We decided to change it up and cut across the field and the dogs started to get more interested.  Tina pointed and relocated a few times before locking up solidly.  I moved in and the birds came up.  Six hens ended up flushing.  They looked really small so I am guessing late hatch or a renest.  we continued to work the field back to truck and didn't move any other birds.

We then moved to another farm.  This farm is just south of Hutchinson.  We started by working the edge of the cattails.  The dogs were worked all the way to the other side of the wetland and started the point and go, point and go that signals a bird nearby.  I took a step to the right and a rooster got up.  I totally blew the opportunity.  I was hunting with my Browning Over / Under and flipped the selective trigger to the side instead of forwards to release the safety.  By the time I recovered the bird was out of range.  I was pissed at myself.  I have been mostly hunting with my Beretta semi-autos this fall and wasn't able to make the adjustment.  arrgg.

After recovering from being ticked at myself we made a swing towards the south edge of the field.  As we pushed through the trees that line the border of the field the dogs started to get more active.  Tina went on a solid point.  I hoped to redeem myself and moved ready for the bird.  Up came a huge Tom Turkey.  It was a shot that I'm sure that even I could have connected on.  Not having a turkey tag and using dogs on turkeys being illegal I passed on the shot.  At the edge of the field we made a move towards some thicker cover.  As we approached the cover we had a rooster bust out well past gun range.

The dogs continued to work well but it was warming up to the mid 50's and the wind was picking up as well.  We decided to call it a day.  With moving so few birds the easy missed opportunity stings all the more.
Posted by tim at 10:35 AM 2 comments:

Thorn In The Eye

The vet pulled this thorn from Marge's eye this morning. She had been rubbing it since Wednesday morning and today was the earliest I could get her in.  He said he didn't think it caused any permanent damage.  I looked and looked but couldn't see anything in there.

Shoreview North Oaks Animal Hospital has done good work for us in the past.
Posted by tim at 2:14 PM 1 comment: