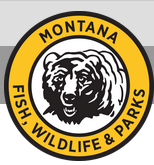 Overall, pheasant numbers should be similar to last year. Birds are available, and biologists are seeing broods of moderate size and age ranges. Ninepipe Wildlife Management Area near Ronan is a popular pheasant hunting spot that spans 4,200 acres. Several WPAs and tribal habitat mitigation sites form a complex of approximately 11,000 acres in the Ninepipe area of similar pheasant hunting opportunities.

Based on overall spring lek attendance for sharp-tailed grouse and “crow count” surveys for pheasants, recruitment varied from poor to good depending on location, but overall numbers are still below the long-term average across the region. Based on these surveys, bird numbers going into the nesting season were considered fair overall.

However, since May the summer has been exceptionally hot and dry. The fire season began in late June and farmers and ranchers are presently experiencing disaster-scale conditions. Water is running low for many agricultural producers and pastures are in very poor condition. The total extent to which the heat and drought impacted upland game birds has yet to be fully seen, but anecdotal reports have been poor thus far.

Taking weather and habitat conditions into consideration overall production and habitat conditions, hunting success for upland bird hunters is predicted to be below average this fall, although still very dependent on both the effort of individual hunters and the quality of the habitat that they are hunting.

When choosing a place to hunt, hunters first should look at their target species. Pheasant will generally be closer to riparian areas and farmlands. Cover needs vary, but finding areas with grass higher than your shin, mixed with shrubs and small draws, and near a food source (farmland/shrub berries) is a good place to start.

Spring “crowing count” surveys suggest that pheasant numbers could be similar to last year in south-central Montana. In the Clarks Fork valley, pheasant have been abundant in recent years and spring counts indicate numbers similar to last year. Elsewhere, numbers of pheasants have been below historic averages for the past four or five years. Hunters can expect to see a similar trend this fall. Overall, the number of pheasants available for hunters in south central Montana could hinge on how well this year’s chicks survived summer weather conditions.

The entire region is in severe drought conditions with a good portion of the area (southern portions of Phillips and Valley counties) in exceptional drought conditions. This has negatively impacted vegetation throughout the season and has likely led to a decrease in nest and brood success of all species.

From check station and wing barrel data, FWP staff observe that juveniles (birds hatched that year) typically comprise most of the birds harvested (60-80 percent depending on the species). With drought conditions, hunters will likely find lower juvenile numbers on the landscape and may have to cover more ground and seek out "good" habitat conditions to be successful.

However, brood success will be low in areas hardest hit by the drought. In the few areas of the region that received some precipitation during early summer, brood success appears fair. The resulting decrease of juvenile birds will mean a lower overall population, and harvest is expected to be down.

Extreme drought, grasshoppers and hot conditions have taken their toll on habitat conditions and upland birds across southeast Montana.

It has been a long, dry spring and summer for agricultural producers and upland game birds alike.

The fall of 2020 provided fair to good bird numbers across most of the region and those birds found a very easy winter with little to no snowfall and limited severe weather.

Spring surveys for upland birds across Region 7 were looking promising. However,

A hot and dry early spring and summer resulted in poor habitat conditions, which may have contributed to poor nesting attempts by upland birds.

Although a drier spring is typically good for nesting upland birds, the spring of 2021resulted in very little grass growth, which negatively impacted the nesting and brood rearing conditions for birds.

Pheasants continue to be the most popular upland game bird to pursue in southeast Montana. They are the most harvested upland game bird and support the most hunter days. The pheasant harvest last year was near the 10-year average of about 14,000. However, harvest is expected to be down from last year due to unfavorable habitat conditions.

Pheasants require different habitat than other uplands birds here, and with the severe drought even the riparian habitats are dried up and in rough shape habitat-wise. Locating residual grass cover will be key to bagging roosters this fall.

Hunters who want to bag pheasants will need to locate areas of high-quality habitat to be successful.

No comments:
Email ThisBlogThis!Share to TwitterShare to FacebookShare to Pinterest
Labels: 2021, MT, MT 2021

North Dakota’s spring pheasant population index is about the same as last year, according to the state Game and Fish Department’s 2021 spring crowing count survey.

R.J. Gross, upland game management biologist, said the number of roosters heard crowing this spring was up about 3% statewide.

“The statewide number might be a bit misleading since we are notably down in the southwest, while most of the state benefitted from good reproduction in 2020 and a mild winter,” Gross said.

“We are hopeful that the latest rain events will foster insect production to bolster pheasant chick foraging,” he said.

The number of pheasant crows heard are compared to previous years’ data, providing a trend summary.

No comments:
Email ThisBlogThis!Share to TwitterShare to FacebookShare to Pinterest
Labels: 2021, ND 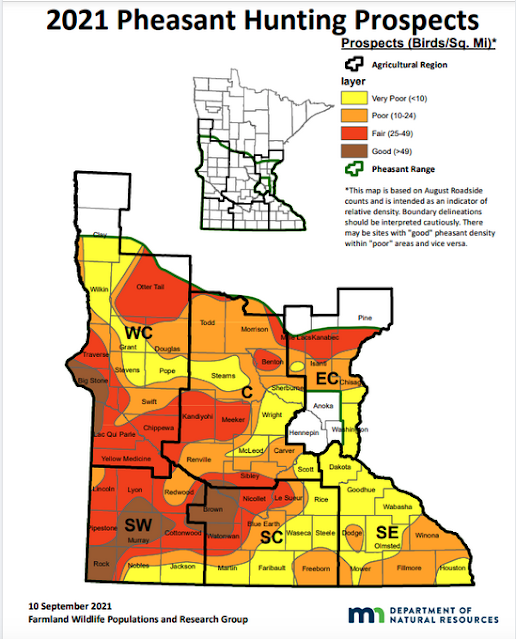 The 2021 range-wide pheasant index (40.7 birds/100 mi) decreased 25% from 2020 (54.5 birds/100 mi) and is similar to the 10-year average (37.7 birds/100 mi). Weather conditions overwinter and during the early nesting season were very favorable, but widespread drought may have adversely affected nesting or brood rearing conditions. Additionally, weather conditions during the 2021 survey were suboptimal which may have reduced detection of target species. Regionally, pheasants declined in all but the Southeast region and declines were greatest in the West Central and Central regions. Still, the core pheasant range (West Central, Southwest, and South Central regions) indices all exceeded the statewide average and were similar to or greater than their respective 10-year averages. The range-wide indices for gray partridge, mourning doves, white-tailed, deer, eastern cottontail rabbits, and sandhill cranes were equivalent to 2020 indices, but like pheasants, exhibited regional variation in trends. Compared to 10-year averages, only mourning doves and deer showed any meaningful difference with doves decreasing 27% and deer increasing 32%

No comments:
Email ThisBlogThis!Share to TwitterShare to FacebookShare to Pinterest
Labels: 2021, MN

Iowa 2021 Pheasant Count Results UP in the Central Corridor 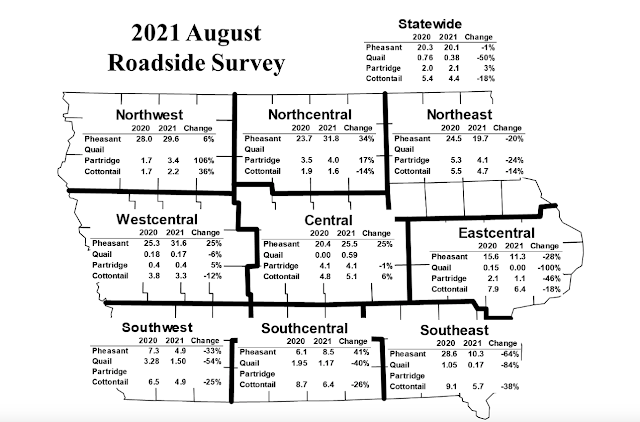 trend, but remains below the long-term average (Table 4, Figure 3). Counts in the NC and C regions were statistically higher than 2020, while counts in the SE region were significantly lower. All other regions reported numbers comparable to 2020 with counts showing upward or downward trends, but none statistically significant.

This means there was no consistent trend in the counts within these regions; some routes increased while others decreased. Iowa research indicates overwinter hen survival, brood survival, and nest success are the major factors influencing annual changes in pheasant numbers. Statewide, the total hens (-2%) and chicks (-1%) counted on routes this year were unchanged from 2020 (Table 3). Statewide data on chicks/brood (measure of chick survival) and age ratios (chicks per adult hen – measure of overall hen success), were also statistically unchanged from last year (Table 3), suggesting that winter hen survival and total nests were similar to 2020, from a statewide view.

However, the regional numbers suggest trends were negative in eastern and southern regions and positive in the northern and western regions, and the overall statewide result was no change (Figure 5). Overall, pheasant hunters in the Hawkeye state should expect pheasant numbers very similar to 2020.

However, hunters in NW, NC, WC, and C regions will likely see similar or better pheasant numbers than 2020, while hunters in the other regions will see fewer birds. Three (NW, NC, WC) of the 9 survey regions reported pheasant averages of 30+ birds per route (Table3/Figure5). Iowa has not had 3 regions report 30+ pheasant averages since 2007. Pheasant hunting last fall in the Hawkeye state was very good with a reported harvest of 300,000 roosters, and this fall should be on par with last year. Given this year’s statewide index of 20 birds per route, Iowa pheasant hunters should harvest approximately 250,000 to 350,000 roosters this fall (Figure 3). As of early September, Iowa was still experiencing very dry conditions across most of the state. If this pattern continues into October, Iowa could see an early crop harvest, with most fields harvested and worked by the pheasant opener. Hunter success is usually very good on openers where most crops have been harvested.

Pheasant hunters, especially in the NW, NC, WC, and C regions could have a very good fall! Northern Regions: Counts in the NW and NC regions trended up from last year, while the NE showed a downward trend (Table 3, Figure 5). Counts in all three regions were above their 10-year averages, and all averaged 20 or more birds per route (Table 4). Counts in the NW region were the highest that region has seen since 2016, and counts in the NC were the highest that region has seen in 14 years - since 2007 (Table 4).

The NC region averaged 31.8 birds per route which was the highest density of any region in 2021, although counts in the NW region were only slightly lower at almost 30 birds per route (Table 3). All 3 regions should offer good to excellent pheasant hunting, particularly around public and private lands with good winter habitat. Better counts in NW came from Clay, Dickinson, Emmet, Osceola, Palo Alto, and Pocahontas counties. Butler, Cerro Gordo, Floyd, Hancock, Kossuth, Winnebago, and Wright counties reported better numbers in the NC region, while the NE region reported good counts in Bremer, Delaware, Fayette, and Howard counties (Figure 6). Central Regions: The WC region reported the highest counts in the central third of Iowa with 31.6 birds per route in 2021, second only to the NC region in density. The C region also had good counts with 25.5 birds per route (Figure 5).

Southern Regions: Counts across the southern regions showed a general downward trend, with only the SC regions showing a slight increase (Table 3 & Figure 5). Counts across all three regions are some of the lowest in the state ranging from only 5-10 birds per route. Declines in pheasant, quail and cottontails were all expected given the snow and persistent ice conditions across the region this past winter. Counts in the SW and SE regions are 20-30% below their 10-year averages, while the SC region is near it’s 10-year average of 7.4 birds per route (Table 4). Some of the better counts in 2021 came from Adams, Louisa, Keokuk, Pottawattamie, Ringgold, Union, and Warren counties (Figure 6)