The first snow of the season, and the hunting was great!

No comments:
Email ThisBlogThis!Share to TwitterShare to FacebookShare to Pinterest
Labels: SD

For the first time in the history of South Dakota pheasant hunting, pheasant hunters will be able to begin hunting pheasants at 10 a.m. CT (9 a.m. MT) for the entire pheasant season, including the resident-only season, which begins this year on Saturday, October 10.

Hunters will also have the opportunity to hunt ringnecks for a couple of extra weeks as the Game, Fish and Parks (GFP) Commission extended the season to January 31, 2021.

These extensions will provide additional opportunity for hunters and bring South Dakota in line with pheasant hunting states like Nebraska and Kansas that surround the pheasant hunting capital.

“It’s very exciting to offer these expanded opportunities to those who want to experience the greatest pheasant hunting in the nation,” said Kelly Hepler, Secretary of South Dakota Game, Fish and Parks.

"Behind Governor Noem’s Second Century Initiative, this is one more way we are working to secure South Dakota’s great outdoor heritage and the next 100 years of pheasant hunting in our state.”

The commission ultimately decided to retain the daily bag limit of three pheasants for the statewide season, but did vote to adopt an unrestricted harvest opportunity for those hunting on a private shooting preserve from Sept. 1 through the end of the statewide pheasant season. The commission amended the original proposal and voted to approve the modification allowing preserve hunters the opportunity if they obtained a statewide nonresident small game license plus a habitat stamp and, for residents, a combination license and the habitat stamp.


To view the proposals in their entirety, visit gfp.sd.gov/commission/information. Audio from the meeting is available through South Dakota Public Broadcasting and will soon be available on the GFP website as part of the meeting archive.
No comments:
Email ThisBlogThis!Share to TwitterShare to FacebookShare to Pinterest
Labels: 2020, SD, SD 2020

North Dakota 2020 Pheasant Count is UP 38% from last year 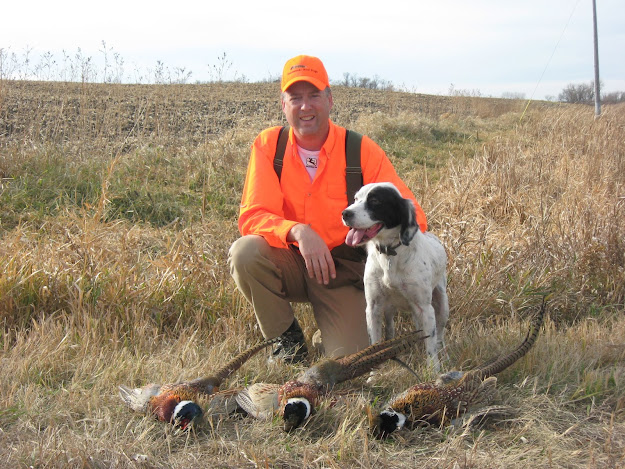 State Game and Fish Department upland game biologist RJ Gross said results of the annual upland late summer counts brought some good news. “We had good residual cover to start the year, and good weather for nesting and brood-rearing,” he said. “There were some areas that experienced abnormally dry periods throughout the summer, but nesting appeared to be successful.”

“While these numbers are encouraging, it’s important to remember that bird numbers in the last five years have been lower than what upland game hunters have been used to for many years, due to changing habitat conditions and the drought of 2017,” Gross said. “For context, these numbers put us about half-way back to where we were prior to the 2017 drought. Local populations are building back up, but they are not at the point yet of spreading out into new territories. Hunters will need to find localized hotspots of pheasants.”

Observers in the northwest counted 12 broods and 91 pheasants per 100 miles, up from five broods and 39 pheasants in 2019. Average brood size was six.

Results from the southeast showed five broods and 41 pheasants per 100 miles, down from six broods and 51 pheasants in 2019. Average brood size was five.

Statistics from southwestern North Dakota indicated eight broods and 70 pheasants per 100 miles, up from six broods and 41 pheasants in 2019. Average brood size was six chicks.

Sharptails observed per 100 miles are up 54% statewide, and partridge are up 45%.

Although partridge numbers have shown a slight increase, Gross said most of the partridge harvest is incidental while hunters pursue grouse or pheasants. Partridge densities in general, he said, are too low to target. Observers recorded one partridge brood and 10 partridge per 100 miles. Average brood size was 10.

The pheasant season opens Oct. 10 and continues through Jan. 3, 2021. The two-day youth pheasant hunting weekend, when legally licensed residents and nonresidents ages 15 and younger can hunt statewide, is set for Oct. 3-4.

The grouse and partridge seasons opened Sept. 12 and continues through Jan. 3, 2021.

No comments:
Email ThisBlogThis!Share to TwitterShare to FacebookShare to Pinterest
Labels: 2020, ND, ND 2020 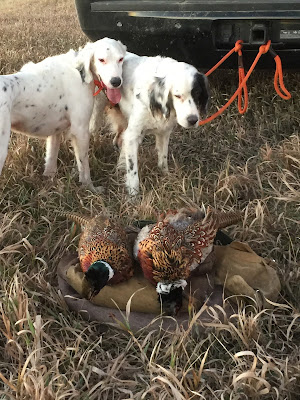 “The weather this spring and summer was favorable for pheasants and enabled more hens to raise chicks, which drove the increase,” said Tim Lyons, DNR upland game research scientist. “We didn’t get hit by spring snow storms or heavy rainfalls like in 2019 and that really is what let hens nest earlier and be successful.”

Though the spring was cooler than average, rainfall was at or below average across much of the state.

“Successful nests earlier in the breeding season also means that chicks will be in better shape going into the fall and winter, which can improve their odds of survival,” Lyons said. The peak pheasant hatch was approximately four days earlier than average this year.
Weather and habitat are the main influences on Minnesota’s pheasant population trends. Weather causes annual fluctuations in pheasant numbers, while habitat drives long-term population trends.

Hunters can expect great opportunities to see birds in the southwest and very good hunting prospects in the west-central, central, and south-central regions, which all reported more than 50 birds per 100 miles.

No comments:
Email ThisBlogThis!Share to TwitterShare to FacebookShare to Pinterest
Labels: MN 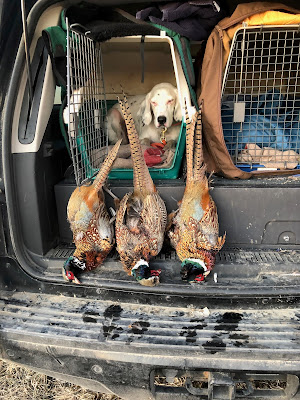 Iowa’s recently completed annual pheasant survey is great news for hunters – statewide, Iowa averaged 20.2 birds per 30-mile route, up significantly from 2019, with six of the nine survey regions averaging more than 20 pheasants per route, the most since 2007.
“Pheasant hunters should expect significantly better pheasant numbers in 2020,” said Todd Bogenschutz, upland wildlife biologist for the Iowa Department of Natural Resources (DNR). “Pheasant hunting this fall could be some of the best the state has seen in a decade.”
Bogenschutz credits the 2020 winter with its mild temperatures and little snowfall that led to higher hen survival and coupled with a dry spring to more successful nesting and an increase in the population. The southeast region led the way with a 163 percent increase, followed by the northeast region with a 115 percent increase and east central region with a 55 percent increase.
While those numbers are very good, the statewide numbers would have likely been better if not for the drought conditions impacting much of the state.
“In the western and central regions where we counted fewer birds, we struggled to get good survey conditions so the results are not likely representative of actual numbers,” Bogenschutz said. “Pheasant populations in these regions appear higher than last year, according to casual staff reports, even though the survey says the population is essentially unchanged.
“Given this year’s statewide index of 20 birds per route Iowa, pheasant hunters should harvest approximately 250,000 to 350,000 roosters this fall,” he said.
Iowa’s quail population was essentially unchanged from 2019 with the highest quail numbers coming from southwest Iowa. While the counts were unchanged, it is still double the number of quail counted from a decade ago. Hunters can expect to harvest more than 20,000 quail this year.
Iowa’s partridge population was up slightly over last year with higher counts coming from northcentral Iowa. Iowa’s rabbit population was nearly identical to 2019 with better populations across southern and east central Iowa. “Cottontail hunters can expect excellent hunting across most of the state this fall,” Bogenschutz said.
No comments:
Email ThisBlogThis!Share to TwitterShare to FacebookShare to Pinterest
Labels: IA 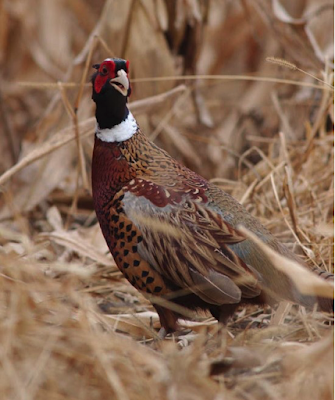 Iowa biologists found more pheasants during their annual survey this year compared to last year, and predicted hunters may have their best season in a decade.
The annual roadside survey by the Iowa Department of Natural Resources found a average of 20 pheasants per 30-mile route, up from 17 last year.
Six of the nine survey regions found more than 20 pheasants per route, the most since 2007, DNR reported.
“Pheasant hunters should expect significantly better pheasant numbers in 2020,” Todd Bogenschutz, upland wildlife biologist said in a news release. “Pheasant hunting this fall could be some of the best the state has seen in a decade.”
Bogenschutz said a mild winter helped, as did low snowfall totals. A dry spring helped nesting.
The southeast region led the way with a 163% increase in the survey count, and the northeast section was next with a gain of 115%. The east-central region gained 55%.
Due to the drought, the western and central zones had lower numbers, DNR reported.
Bogenschutz estimated hunters will bag 250,000 to 300,000 birds, a strong number in recent years but far below the historic highs of more than 1 million.
Read the original article
No comments:
Email ThisBlogThis!Share to TwitterShare to FacebookShare to Pinterest
Labels: IA

The dogs of Soggy Acres travel to Montana for a unique and picturesque upland experience. Join the crew as they chase pheasants and Hungarian Partridge with Labrador Retrievers and Spaniels.
No comments:
Email ThisBlogThis!Share to TwitterShare to FacebookShare to Pinterest
Labels: MT
Newer Posts Older Posts Home
Subscribe to: Posts (Atom)