Snow could cause problems for Southern MN region's pheasant population 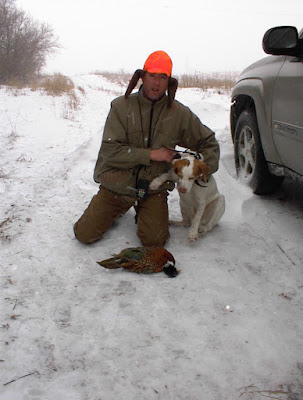 Some local wildlife is feeling the brunt of February's storms.
Small animals that don’t hibernate such as pheasants are often most impacted by the weather, especially with large snow drifts such as those from last weekend’s storm.
Coming into February, pheasants were in good shape due to a mid-winter warm spell, but a polar vortex and a lot of snow has turned that around. Heavy snowfall will cluster birds and increase competition for food, said Chris Fritz, Goodhue County Pheasants Forever vice president and habitat coordinator. If southern Minnesota doesn’t get some melting soon, roosters could begin killing hens in a fight for food.
“If we haven’t already, we’re going to start losing hens to predation and self-destruction,” he said.
For an already struggling pheasant population, that’s bad news. Most of the area is already considered “very poor” for pheasant hunting by the Minnesota Department of Natural Resources, with less than 10 pheasants sighted per square mile during last year’s annual roadside survey.
The western side of Le Sueur County and part of eastern and central Goodhue County are considered “poor,” a step up from Waseca, Rice, Steele and Dakota counties, which are all “very poor.”
The closest area for "good" or "fair" pheasant hunting is in Nicollet County, which had over 49 birds per square mile in some western spots and between 25 and 49 birds in other spots during last year's survey.
In the state’s south central pheasant region, which contains Rice, Steele and Freeborn counties as its eastern border, the pheasant index is down 21 percent over its 10-year average and 71 percent from its long-term average.
Animals, including pheasants, do have coping mechanisms for the storms, Minnesota Department of Natural Resources Area Wildlife Manager Jeanine Vorland said.
Read the rest of the SouthernMinn article

Email ThisBlogThis!Share to TwitterShare to FacebookShare to Pinterest
Labels: MN