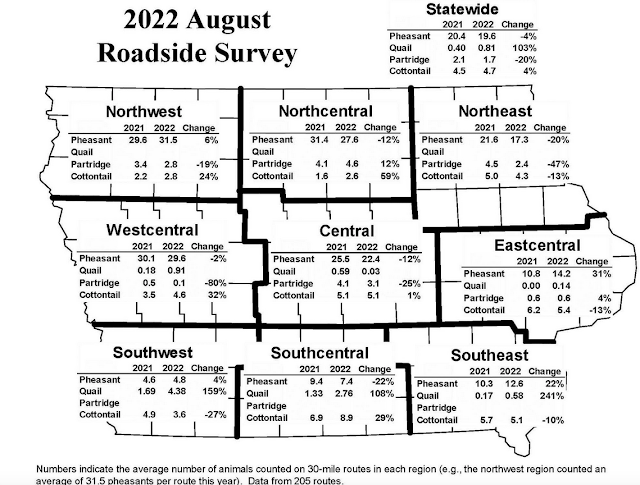 Results of Iowa’s 2022 pheasant population survey are in and the results were nearly identical to that of 2021, when hunters harvested the highest number of roosters in more than a decade.

Within the survey, the northwest, west central and north-central regions again had the highest counts within the state, followed by the northeast and central regions. The full report is available at www.iowadnr.gov/pheasantsurvey.

“If hunters enjoyed last year, they should enjoy this year. Pheasant hunting will again be good for most of the state, with the best hunting being north of Hwy. 30,” said Todd Bogenschutz, upland wildlife research biologist with the Iowa Department of Natural Resources.

Based on the results of the August roadside survey, Iowa hunters can expect to harvest 300,000 to 400,000 roosters this year, which is similar to last year, when the harvest was the highest in more than a decade.

“Bird harvest relies heavily on the number of hunters in the field and the past two years saw highest number of pheasant hunters since 2009, and that has translated into our increased harvests,” Bogenschutz said. “The birds are there, so the harvest totals will depend on how many hunters return.”

While the pheasant count varied by region, the quail count was more consistent; and this year, it was consistently higher across southern Iowa’s quail range.

“We had a lot of anecdotal reports of quail whistling this summer and that increase was reflected in the survey,” Bogenschutz said. The highest counts came from southwest Iowa, followed by the south-central region.

The annual August roadside survey has been collecting data on Iowa’s upland game populations since 1962.

Hunters have the opportunity to hunt these species on additional acres of private land enrolled into the popular Iowa Habitat and Access Program (IHAP).

Enrollment in the program is at an all-time high of nearly 32,000 acres. The IHAP allows hunters access to the portion of the property covered by the agreement, from Sept. 1 to May 31. Conservation officers will provide assistance, and enforcement, if needed.

Email ThisBlogThis!Share to TwitterShare to FacebookShare to Pinterest
Labels: 2022, IA