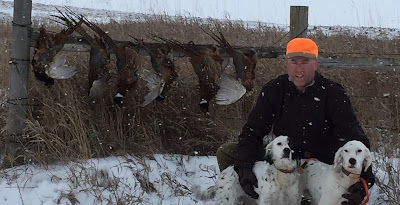 A late-season pheasant is an entirely different bird than those found early on or even in the middle of the season. Hunting them is similar to trying to tag a wary old whitetail buck. They’re paranoid, jumpy, and just plain difficult to get close to.

Depending on which state you live in, pheasant season may run until the end of January. Not only do you need a good dose of luck to connect with birds that have been continually harassed for nearly three months, but you also need to hunt much smarter than you did on opening day. Here are a few ways to outsmart one of the smartest game birds on the planet—the late-season rooster pheasant.

While late-morning hunts can be good in the middle of the season, you should get up early during the late season. Wary birds often like to fly out and feed before shooting time and right at first light. You’ll want to be in the field before daybreak to catch any stragglers. Just make sure that when you shoot, there’s enough light to differentiate between hens and roosters.

Likewise, afternoon hunts can be productive in the late season. Hit the field a few hours before sunset, after pheasants have had time to feed and return to their loafing/roosting areas. Just be sure to quit well before the sun goes down to give birds time to settle for the evening.

A fresh skiff of snow may be all it takes to get late-season roosters to hunker down and hold for the dog. The snow doesn’t need to be too deep, either, just enough for pheasants to burrow into, but not enough to make walking overly difficult for them. Best of all, you can track pheasants in fresh snow, because it’s much quieter than refrozen, crunchy snow.

While you don’t want to over-choke when hunting pheasants during the middle of the season, now is the time to tighten up your patterns. This isn’t to say you can’t shoot pheasants in January with more open chokes (especially while quail hunting). If you’re hunting over a pointing dog, you may be able to get by with a Modified or even Light Modified tube, depending on how staunch the dog is. But as a general rule, if pheasants are the main course on the menu, tighten chokes up by one or two constrictions in the late season. A full choke works well, especially if hunting with a flusher, and most aftermarket chokes labeled as “late season” are actually Improved Modified tubes.

See all 8 tips and the complete Field and Stream article