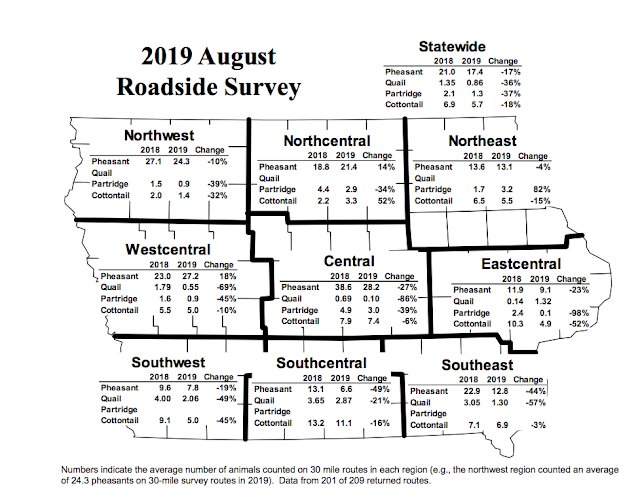 Iowa’s pheasant hunters should expect to find a similar number of birds as last year, with the exception of south central and southeast Iowa, where the pheasant population decline was more significant.


Based on the August roadside survey, Iowa’s statewide average is 17 pheasants per 30 mile route, down from 21 per route last year.

“The survey shows a population similar to last year for most of the state and based on those results, pheasant hunters can expect 2019 to be a near repeat in most regions of 2018,” said Todd Bogenschutz, upland wildlife research biologist for the Iowa Department of Natural Resources.

He said hunters shouldn’t avoid hunting areas with lower counts, but rather focus on hunting the best available habitat.  “Hunting areas where there’s good habitat next to a food source should increase the chance for success regardless of where you’re hunting in the state,” he said.

Iowa’s quail population was down 36 percent from last year. Iowa’s quail range is across the southern three tiers of counties.

That wet spring could pay benefits down the road to hunters who cannot get to the field until after opening day.

Farmers who faced significant planting delays in the spring will likely have a later than normal harvest. Hunters should expect to see standing crops when the season opens, making hunting more difficult early.


Email ThisBlogThis!Share to TwitterShare to FacebookShare to Pinterest
Labels: 2019, IA