PIERRE, S.D. -- The South Dakota Game, Fish and Parks (GFP) has completed the annual pheasant brood survey and the results show a 76 percent increase in the statewide pheasants-per-mile index from 2013.
Highlights:
Camberlain + 147% over 2013
Pierre +142% over 2013
See the further down for more areas listed.
From late July through mid-August, GFP surveyed 109, 30 mile-routes across the state to estimate pheasant production and calculate the pheasants-per-mile index. The survey is not a population estimate, but rather compares the number of pheasants observed on the routes and establishes trend information. Survey routes are grouped into 13 areas, based on a local city, and the index value of each local city area is then compared to index values of the previous year and the 10-year average.

“With favorable weather conditions this past winter and spring, along with the availability of quality nesting habitat across the state, we are going to see an increase in this year’s pheasant population,” stated Jeff Vonk, GFP Secretary. “Survey results show pheasant numbers rebounded the strongest in central South Dakota; especially in the Pierre, Chamberlain, Mobridge and Winner areas. Results also indicate that pheasant numbers are substantially higher than 2013 throughout much of eastern South Dakota.”
The 2014 statewide pheasants-per-mile index of 2.68 is up from 1.52 in 2013. The statewide pheasant-per-mile index is similar to 2002 when hunters harvested 1.26 million roosters.
“Habitat is at the forefront of the conversation right now and is a crucial factor in pheasant numbers,” stated Vonk. “Bird numbers are higher this year due to excellent reproduction in parts of the state where quality habitat conditions still exist, primarily on grasslands including those enrolled in the Conservation Reserve Program as well as fields of cereal crops such as winter wheat. We continue to work in cooperation with the Governor’s Pheasant Habitat Workgroup, partner organizations and agencies, and landowners to provide an improved future for habitat in our state.”
Public hunting opportunities are abundant in South Dakota. Over 1 million acres of publicly owned and private land leased through GFP’s Walk-In Area Program and the James River Watershed Conservation Reserve Enhancement Program is available in the primary pheasant range of South Dakota. The 2014 public hunting atlas and a web-based interactive map of public lands and private lands leased for public hunting can be found online at http://gfp.sd.gov/hunting/areas.
“The results of this survey are highly anticipated by many who have a strong interest in South Dakota’s hunting heritage. The availability of pheasants and pheasant hunting opportunities in our state this fall should serve to enhance that heritage,” concluded Vonk.
South Dakota’s traditional statewide pheasant hunting season opens on Saturday, Oct. 18, and runs through Jan. 4, 2015. 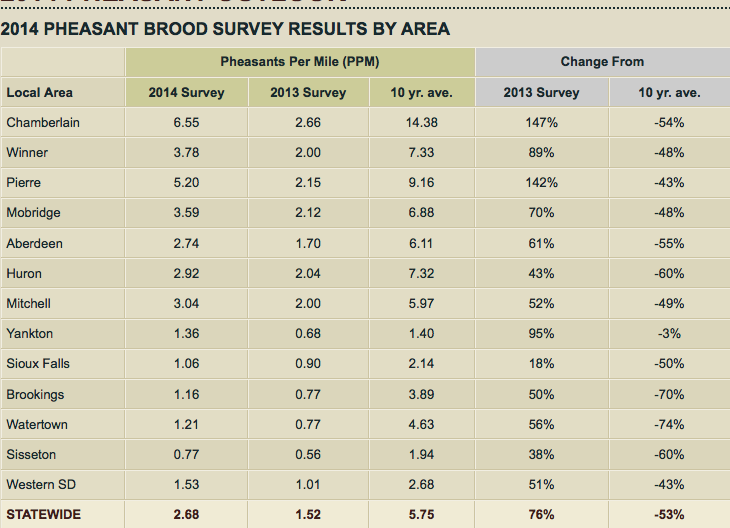