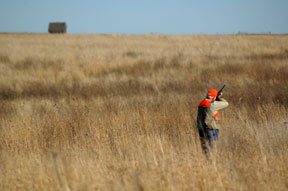 A friend of mine once accused me of having a Texas-quail-low-humidity-over-setters-on-Friday-afternoons shotgun, his point being that I maybe had gone a little overboard over the years accumulating shotguns for special purposes. I don’t have a gun like that, of course. I sold it, selling or trading shotguns being the best way I know of to buy other shotguns. Besides, I had no way of knowing if I’d even be hunting on any Fridays.

But, you know, I wouldn’t play golf with one club (even though you can’t call what I do, strictly speaking, golf) because my driver can’t do what my pitching wedge does and vice versa, and I can’t expect my Michigan brush-country woodcock gun to be of much use on late season South Dakota pheasants. And vice versa.

As the title more than implies, I’m going to talk about prairie shotguns, those guns used in the Big Open for birds other than pheasants, mainly Huns, sharptails, and prairie chickens. These are birds and it’s a place that calls for some specialization. Let’s take the birds first.

Huns can be tough to kill at times, especially late in the season when, as Ben Williams says, the September Squeakers have turned into November Rockets. I don’t mean because of the distance of the shots they offer as the season progresses, though that’s a major factor. I mean the birds need to be hit solidly. Sharptails and chickens, on the other hand, don’t have to be hit with a hammer to bring them down – a few shot of moderate size will usually do it. But that is where range comes in.

Email ThisBlogThis!Share to TwitterShare to FacebookShare to Pinterest
Labels: Shotguns