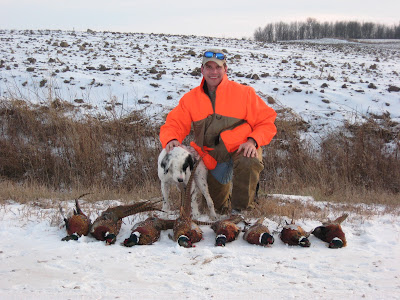 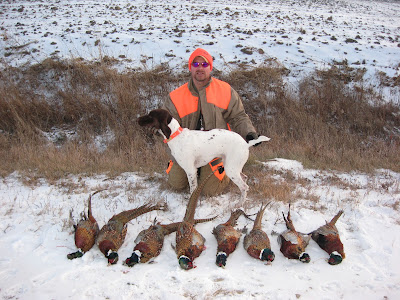 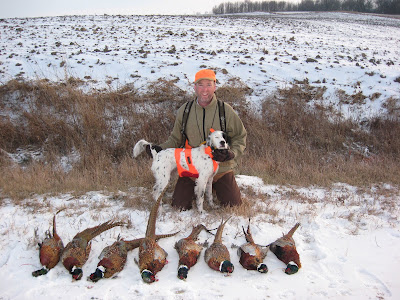 This was my first group pheasant hunt of the season. Usually it is just myself and maybe one other hunter. Today we had between 4 and 6 hunters in the field at one time. Even though we had a group we didn’t do the traditional push and block type of hunting that most people associate with group hunts.

It was a nice day for hunting with just a couple of inches of snow and at 32 degrees it was comfortable for both hunters and dogs.

The first farm was just outside of Benson, MN.

We started working a fence line and Young Mark ( We had 3 Marks hunting ) dropped two roosters in quick order. Both of them looked well hit but we were unable to find one of them. We had 3 dogs looking for it and still couldn’t find it. After abandoning our search we hit a section of thicker cover and after pushing through it Mark L put one up out the thinner cover and dropped it in one shot.

We then tackled the cover on two sides of a drainage ditch and Young Mark and his Springer Diesel took two more rooster in his usual quick shot fashion. After the two birds we almost had a disaster as two of the dogs went off the ice and into the open water of the drainage ditch and the water was moving faster than expected and the dogs weren’t able to get back on top of the ice. After some spread eagle on the ice action by Tony O and Young Mark they were able to bring the dogs back to safety.

After working the field for a bit longer we decided not to pound it any longer and made the move to a new farm outside of Willmar, MN. The last time I hunted this property was the opening weekend of 2006 and I had just had a round of chemo where they had added a new drug to my regimen and I had trouble walking through all but the thinnest cover. It was much nicer today.

We started out following another drainage ditch hoping to pinch the birds. We didn’t see any along the main portion but we went along a smaller ditch that was frozen over we put up two rooster and I was able to pull some feathers off of one but it flew into some think cover that we don’t have access to. The next strategy was to work a couple of fence lines and the nearby cover. This strategy didn’t pan out. There was a small area of thick cover and willows that we hadn’t hit so we decided to employ a little push and block action. Tony O, his two GSPs, myself and Tina the setter set out across the cut corn field towards the thinner grass and the thick cover at the end of it. As soon as we hit the thin cover the dogs started to lock up. Tony had a rooster get up just behind him that he dropped with his second shot. I had one get up that I was able to connect on ( finally ) that then flew right into the trunk of a tree. A couple of hens got up then a Rooster went high and Young Mark who was post below the cover took him on a high overhead shot. After retelling the action for a bit we decided to drive to the other side of the farm and re-hunt a couple of spots. We walked in through the smaller drainage ditch that we had hit before but didn’t move any birds. We walked the edges some more and decided to call it a day and as we walked out on the small ditch ( the fourth time we hit this cover ) Young Mark flushed and dropped his 5th rooster of the day. His shooting made the rest of us look bad but made the group look good.