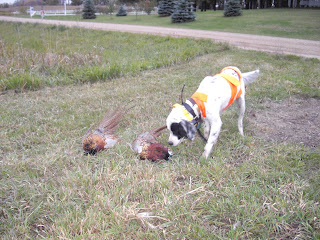 This year’s MN pheasant opener was certainly different in some respects but the results were the same...

Last year I was worried about keeping the dogs cooled down and this year I was planning on to keep the warm after the hunt.

Saturday snow on the ground greeted us as we loaded up to head out. We started at a farm west of Hutchinson, MN. I had a feeling it would be a tough hunt when we pulled up and I could see that all of the corn was still up. I started with Tina and Marge, the two setters, and worked the crp for 2 1/2 hours. We got a number of good points on hens but no roosters. We switched to a farm south of town. Last year I could walk almost all of the property and not worry about getting wet. This year there was standing water on a lot of the low areas that have been dry the past few years. I started Tina by herself at this farm. We hit all of the usual hot spots and only put up 3 hens. I took out Fergie, the pointer, to give her a chance to stretch her legs and and to give Tina a break. We ran the edges of the cattails and a couple of other areas that were a little bit thicker but still no luck. After a little lunch and chance to rest the legs we made our way back to our first farm. We were able to take a rooster off of a nice point at about 4 pm. We had been working the edge of the corn hoping to catch some birds on their way to rest for the night. About 20 minutes later I hit one from a little ways away. I thought it was a good hit but after looking for quite a while we didn’t find it. We continued to work the field and continued to find hens on a regular basis but it took a while longer before the next rooster point. I saw feathers fly with each of my three shots but he didn’t go down. I watched for where he did land. After walking the area for a little while we got another point. This time he didn’t get up quite as quickly and ended up in the game bag. As we were heading back to the truck the snow flurries were starting up again and the sun was setting. A long day of hunting especially compare to last year when we filled out in under 1 hr.

Sunday we slept in a bit and didn’t start to hunt until the afternoon. I thought this strategy might pay off since we hadn’t seen any roosters until the afternoon the day before. It was a bit of a nicer day but my strategy did not pay off as we only saw a few hens and no roosters at all. It was still an enjoyable afternoon and the dogs had a good time.
Email ThisBlogThis!Share to TwitterShare to FacebookShare to Pinterest
Labels: 2009, 2009 Pheasant, Minnesota Pheasant Hunt, MN Pheasant Hunt, Original Content, Pheasant, Pheasant Hunt