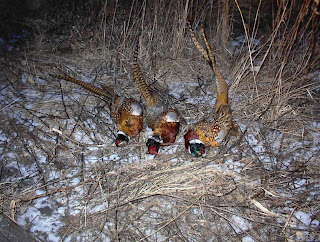 So, I had planned on taking Friday off and making it a full weekend of hunting.
The time and temps on the banks were saying 5 above as I was driving out to start the day just South of Hutchinson, MN. I even decide to put in the fleece liner in my Columbia Ptarmigan hunting jacket ( an older model ). Tina, Marge and I got off to a good start by pushing the unit towards the of the field. We didn’t move any birds at the corner this time. We worked around the small wetland with heavy cover and still no birds, not even a wild flush. I was starting to worry. We then worked along the plowed cornfield moving towards the highway. The dogs were working through the pine trees and brush that border the field. After about 100 yards they both locked up, I swung wide past them and approached the points from the cut field. My thinking was that if I did miss at least the bird would flush towards the property and we could attempt to hunt it after it did land. I didn’t miss. It was a decent shot and the dogs were on it right away. We worked the unit for another hour plus hitting all of the usual hot spots. Only saw one hen during the rest of the hunt on the unit. It is starting to seem like it may be played out for the season.

Loaded up the dogs and headed west towards Sacred Heart, MN I took Fergie out at the next location. The next three units are all by each other and can be walked to from one parking spot. The two units that hunted Fergie on were 25 and 35 acres. On the 25 acre unit we put up 4 hens that we pushed off of the edge. It would have been nice to get her a Rooster. We put a fair amount of time into the 35 acres and didn’t move anything. On returning to the Trailblazer I kenneled Fergie and brought out Tina. The third unit was a little bigger and we did get 2 nice hen points but no Roosters. Loaded back up again and drove 5 miles to another unit. This one is about 40 acres. Tina and I worked a set of pine trees that usually holds birds but none were to be found this time. I did see one flush wild towards a good sized cattail area. We angled towards the area that he looked like he landed. Tina ended up going in one area and I cut in a little ways away. There is a path cut through the cover and Tina and I were working towards each other. I happened to look down the path and could see the Rooster looking towards Tina as she was approaching. I took another step and it flushed. I was able to connect on the shot and we had to do some digging around the cover but were were able to find it. We continued to work the unit and hit a second set of trees and had a number of birds flush long on us. We watched where they landed and worked that way hoping to get lucky again. it wasn’t to be.

The next spot was a bit of a drive up to Benson area. The temp was up to 20 degrees This is a bigger unit and from the harvest reports always seems to hold birds. It was just my second time ever hunting here. We only had about 90 minutes of daylight left. There is a area of larger trees and Tina, Marge and I started towards them. We had a number of birds flush long on us with no shots taken. A short ways later I did get a shot at one that the dogs had been working. It looked like he was hit but he was flying strong. He ended up doing the fly straight up in the sky and spiral down. Unfortunately he landed in some 10 foot high cover and we looked quite a while but still couldn’t find him. I hate losing birds, just seems like a waste. We worked along the the tree line and had more wild flushes. After another 15 minutes we pushed through the trees and the dogs both went on point. I was able to bring this one down and we went right to where i had him marked. He tried to make a break for it but Tina got on him and we were able to put him in the game bag.

After cleaning the birds we started to make the drive home. As we were pulling out of the field the snow started to fall. The drive that was normally 3.5 hrs was closer to 5 hours. Left the house at 7 and got home at 9:30. A long day of hunting and driving but well worth it.

Saturday and Sunday both had highs of around 10 degrees and were windy. We bagged it. I just don’t find it fun to hunt when it is that cold. Hopefully the rest of the season won’t be that cold......
Email ThisBlogThis!Share to TwitterShare to FacebookShare to Pinterest
Labels: 2008, 2008 Pheasant, Minnesota Pheasant Hunt, MN Pheasant Hunt, Original Content, Pheasant