A New Area - lots of birds 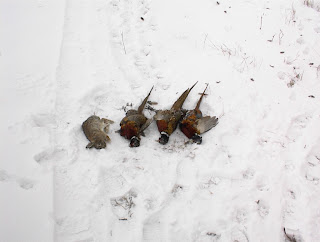 12/19/2008
Headed down a half hour west of New Ulm to hunt a new farm outside of Springfield.
The harvest reports were showing lots of birds being seen. The farm consists of two areas, one 80 acres and one 100 acres. It was a long drive as we had snow early in the morning and I was also catching the front end of rush hour traffic. We started hunting around 10 am.

It was about 15 degrees, light wind, and a few inches of snow on the ground. We parked on the edge of a small wood lot and put the two Setters Marge and Tina on the ground, as soon as we rounded the corner a few birds got up too far out to shoot. A few more flushed long as we hit the end of the wooded area. We started to walk along the fence line towards the other side of the field. We walked the whole side of the field and didn’t move a bird. I was starting to get nervous. Almost as soon as we hit the end and rounded the corner we started to see hens flush long. We walked about 50 yards and got a nice point and put up a rooster. One shot brought him down but he wasn’t hit hard. We spent a fair amount of time looking for him but didn’t find him. There were so many pheasant tracks in the area that it made it hard for the dogs to track. As we moved across the field towards a lower area with some mature trees I could see even more birds flush. I tried to mark their landing areas so that we could walk them up again. After another 100 yards or so Marge went on point and we put up a rooster that didn’t get away and was an easy pick up for the dogs. Moving down the field we got another 8-10 hen points. It was getting so bad that the dogs we starting to creep a little bit.

We started to work towards the area that it looked like most of the earlier flushed birds had landed. We got a few more points but they were all hens. I decided to re-walk the area where we hit the bird that we lost and see if somehow we would find him hiding. We didn’t move any birds on the second pass through. We started to work our way back to the truck with the idea of hitting the second field. As we walked Tina started to point and move, point and move. I figured that she was just starting to overdose on all of the scent and tracks. When she finally did lock up I was only half heartedly kicking at the grass when a rooster came up fast and furious. Fortunately I hadn’t totally spaced out and was able to solidly plant on shot on him. We continued back to the truck and along the edge of the wood lot the girls pushed another rooster up and we were able to also bag him.

Back at the truck I loaded Tina and Marge into their kennels for a well deserved rest. I swapped out the 12 gauge for the 16 and Fergie out of her kennel for some exercise. Even though we had out three bird limit I still carry a gun in case we come across a wayward Hun or a Raccoon gets in the way. We put up another 7 or 8 hens right away and worked the area of the field that bordered the road. As we got towards the end of this area I started to see a lot of rabbit tracks and was actually thinking that it was odd to see all of those tracks and not be pushing any rabbits along. Just then I looked up one of the wheel tracks through the snow and a rabbit was sitting there. I decided to take him. Normally wouldn’t shoot a rabbit because I don’t want to have the dogs think we are hunting them, they like following them too much as it is. But, Fergie is blind and it wouldn’t mess her up at all. Plus I have kind of thought of taking a rabbit since I had one as part of a wild game stew at a restaurant in Quebec, also Minnesota Outdoors News had just the day before had an article on rabbit hunting and how to prepare them.
On the way back to the truck Fergie had a really nice point on a hen so that was a great bonus to see her so excited by that.

Just under three hours of hunting and we got our three birds plus a bonus bunny. We had more than 15 points and saw well over 50 birds. It was a good day to hit a new location.