A Chilly and Wet One 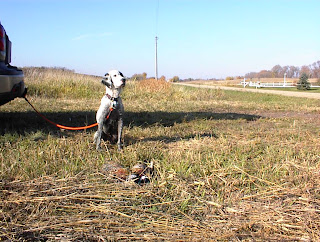 Only hunted Sunday this past weekend. I started out with my two English Setters. We were west of Hutchinson, MN.
Started out at about 25 degrees and sunny which actually wasn’t too bad. Started out by seeing 4 hens grouped together. We continued to work around the edges of the field in hopes of pinning one there. We ended up pushing towards the drainage ditch. One Rooster got up a little ways out and I hit him but he dropped on the far side of the ditch. By the time we walked around the ditch to get to where it went down we could find him. We worked around the area for quite a while and still no trace. Tina and I worked that side of the ditch while Marge was holding on the other. As we pushed along Tina started to work a hot track. After about 50 yards she locked up. I kicked around and out up a Rooster. I thought I heard him drop into the grass along the ditch. I looked and couldn’t see him. Tina was searching and wasn’t finding any scent. I was starting to get upset and then I heard some splashing, Looking into the ditch I saw just the bird’s feet sticking up from the water. Tina didn’t see it and certainly couldn’t smell it. I ended up going in after him. The water was over my knees and dang cold. After putting the bird into the gamebag we worked along the ditch back towards Marge. As we closed in on Marge Tina started to get birdy again. We had one trapped between the two dogs. It was an easy shot and an easy pick up.

Back at the Trailblazer I put the two dogs away and put on some dry socks and boots ( I usually hunt with spares of everything ) and took Fergie out for a nice workout just to stretch her legs. We put up a hen which was fun even though she can’t see them she still knows that something is / was there.
Email ThisBlogThis!Share to TwitterShare to FacebookShare to Pinterest
Labels: 2008, Minnesota Pheasant Hunt, MN Pheasant Hunt, Original Content, Pheasant, Pheasant Hunt